So I finally had some downtime this past weekend to work on this project (hard to come by these days).

Hoping to add on a GUI and get the code out there for others to try out soon!

Popular posts from this blog 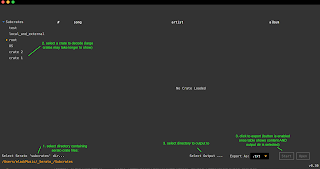 this latest version now displays Serato crates and will convert all nested crates, if parent crate is selected: The latest version  will no longer run  on JRE 8 and requires JRE 11 or better (can be downloaded for free from OpenJDK or AdoptOpenJDK) source code and executable jar here: https://gitlab.com/eladmaz/SeratoCrateExporter Quick start: * download jar * open terminal and execute jar: java -jar serato-crate-exporter-0.3-SNAPSHOT-jar-with-dependencies.jar all comments/questions welcomed!
Read more 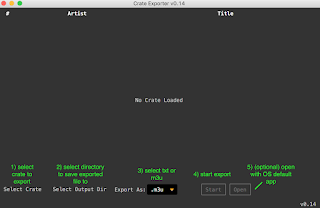 I've gotten requests to add ability to convert Serato crates into m3u files, so without further ado here are a few screen shots of the new-and-improved Crate Exporter: Click the 'Export' arrow to select one of the available formats:  Click 'start' to export, and 'open' to open the last exported file with the OS's default application: Here's the crate in text format (currently only the #, Artist, and Title column are exported): Opening an .m3u file will also open the file in whichever player is the OS's default (iTunes on OSX): Requirements & Limitations * You'll need at least JRE8 (Java Runtime Environment) installed to run the jar. * only been tested on OSX Mojave (though it should run on other OS's as well) * nested crates not yet supported (only selected crate will be converted) * only mp3 files currently supported (wav/mp4/etc files will be skipped) Executable jar & source code  here: h
Read more

February 29, 2020
just a quick PSA to let users know that i've expanded the number of audio file formats supported (switched to using JaudioTagger for decoding). The latest version will no longer run on JRE 8 and requires JRE 11 or better (can be downloaded for free from OpenJDK or AdoptOpenJDK) Limitations: *  assumes all audio files in the crate are on the same drive (future update will attempt to search other mounted volumes) * nested crates are not yet supported. (future update will support this) source code and executable jar here: https://gitlab.com/eladmaz/SeratoCrateExporter/-/tree/dev_0.20 Quick start: * download jar * open terminal and execute jar: java -jar serato-crate-exporter-0.20-SNAPSHOT-jar-with-dependencies.jar
Read more